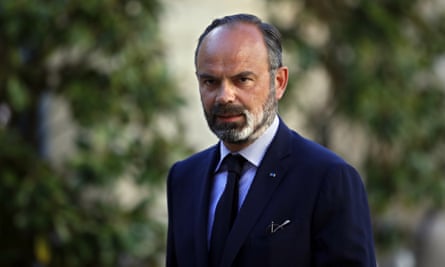 Édouard Philippe will remain as head of an interim government until Macron names his successor. Photograph: Thomas Coex/AP

Édouard Philippe, the prime minister of France, has tendered his government’s resignation after seeing the country through the coronavirus pandemic.

The Élysée Palace announced Philippe, an increasingly popular figure during the crisis, had submitted the government’s resignation but would remain as head of an interim government until the president, Emmanuel Macron, carried out a reshuffle and named his successor.

In French government reshuffles, the prime minister tenders their resignation before new cabinet appointments, but can still be reappointed to the position.

The Élysée statement said: “Mr Édouard Philippe has today handed his resignation from the government to the president of the republic who has accepted it. He will remain, with other members of the government, to deal with current matters until the nomination of a new government.”

During the Covid-19 crisis it fell to Philippe to deliver details, while Macron painted the bigger picture. During news conferences, Philippe appeared calm, reassuring and serious as he outlined lockdown rules and other unpopular regulations deemed necessary during the health emergency.