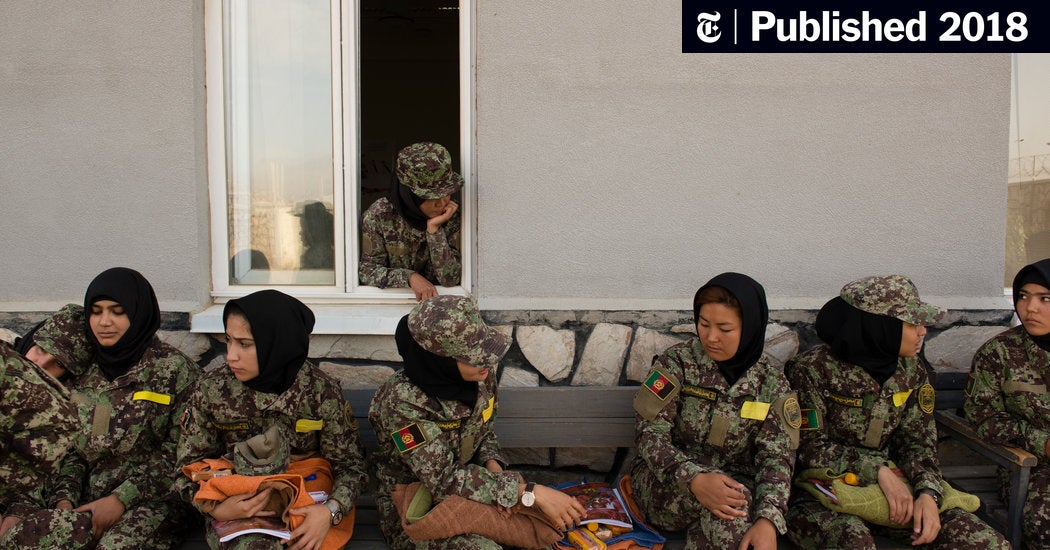 The Many Dangers of Being an Afghan Woman in Uniform

Two dozen Afghan women in their early 20s, dressed in camouflage uniforms, trudge through prickly thistle plants under a nearly full moon. No one dares speak, the silence broken only by too-big army-issued boots crunching to a chorus of stray-dog howls and midsummer cricket chirps. It’s one of the first times these women, all seniors at the Afghan National Army Officer Academy in Kabul, have taken part in a nighttime exercise. Normally they would be tucked away in their dorm — its hallways plastered with posters of Marie Curie, Rosa Parks, Amelia Earhart and Col. Latifa Nabizada, Afghanistan’s first female helicopter pilot — surrounded by barbed wire.

Female cadets must adhere to a strict 9 p.m. curfew. But on this warm night, the women smile in the darkness, leaping over ravines and clambering up hills of dirt, spreading out into formation with their rifles in tow. Off in the distance is a flurry of commotion — the pop pop pop of blank rounds fired by their male counterparts; their flares pierce the night sky and set the dry grass ablaze. (The female cadets’ Afghan superiors have not yet allowed them to fire blank rounds or flares as part of a nighttime attack drill; so far, they’ve only had limited daytime firearms training.) Led by a female sergeant known to the women as Sergeant Hanifa, the group is flanked by American and British advisers who advocate drills like this while trying to navigate cultural norms that dictate how Afghan women must act and how they are viewed. In this case, in a bid to recruit more women, academy leadership has assured parents that female cadets won’t be out unsupervised at night, for their own protection.

“I have to do a head count, make sure we have all the lambs,” said Maj. Alli Shields of the British Army, using the nickname given to the women by Afghan male staff. “Or else this will be the first and last exercise.” Next to her stands Lt. Cmdr. Rebekah Gerber of the United States Navy, a senior gender adviser for the Afghan Ministry of Defense, who watches the drill with her hands on her hips, mentally taking notes. She’s one of a dozen advisers from NATO countries working with the Afghan government to integrate and support both men and women across the security sector. The lofty end goal: gender equality. A self-described fiery redhead pushing what she jokingly calls a “ginger gender agenda,” Gerber comes bearing a bold message for the Afghans and her coalition colleagues: “Get on board or get out — it’s happening.” It’s a job Gerber doesn’t take lightly. Deployed halfway across the globe from her four daughters — her second overseas deployment, after serving on a Navy ship in the Persian Gulf — she’s driven by thoughts of her girls back home “and for the women to come.”