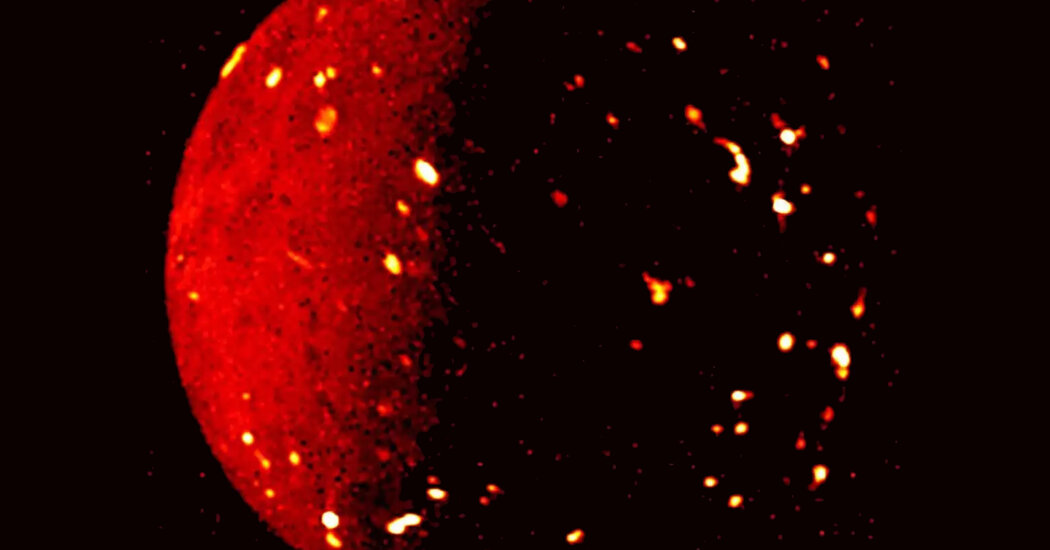 Orbiting near Ganymede and Europa, two of the other largest Jovian moons, and the planet itself, Io’s mineral composition is constantly pulled and pushed by gravity, creating frictional heat deep inside the moon. This makes it extremely volcanically active — there are hundreds of volcanoes and extensive networks of lava flows marking Io’s surface.

Despite a number of close-flying spacecrafts over the past few decades — including the Voyager 1 and Galileo missions — as well as constant observation from Earth, there are lasting mysteries about the kind of volcanic activity on Io and how the moon’s fiery energy interacts with Jupiter and other nearby bodies.

Last year, Dr. Morgenthaler, who studies gases Io emits and the cloud said gases create around Jupiter, picked up signs that a different kind of eruption — a more powerful or more persistent one — was occurring.

“It’s an exciting observation,” said Ashley Davies, a planetary scientist and volcanologist at NASA’s Jet Propulsion Laboratory who was not involved in Dr. Morgenthaler’s study. “It’s showing that Io is certainly one of the most energetic bodies in the solar system, and you have no idea how it’s going to appear when you turn your telescope on it.”