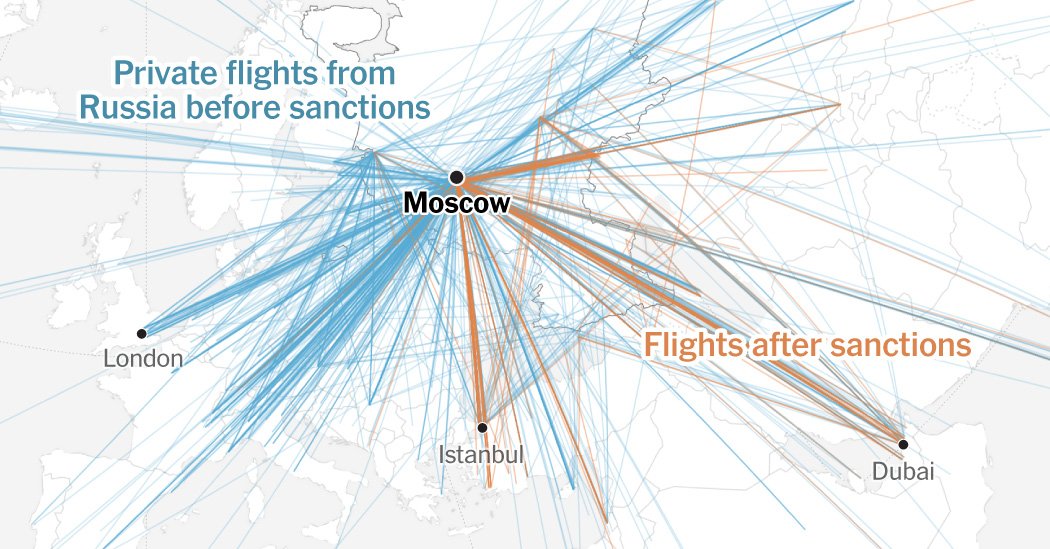 The New Geography of the Russian Elite

Before the invasion of Ukraine, private jets taking off from Moscow flew to Paris, Milan and Geneva more often than anywhere else. Departures from Russia, Feb. 1 to Feb. 24. Note: Origins and destinations are shown, but not specific flight paths.

But after Feb. 24, as Europe started to close its airspace to Russian planes, wealthy Russians started to fly elsewhere: to Central Asia and the Middle East , most of all.Departures from Russia, Feb. 25 to Apr. 21

By May, a new geography of the Russian elite had taken shape, data on nearly 2,000 flights analyzed by The New York Times shows. That world has one clear center: Dubai . Departures from Russia, Apr. 22 to May 8

After the Russian invasion, the threat of closing borders, international sanctions and imprisonment drove tens of thousands to flee Russia.

Journalists, activists and tech workers flocked to Armenia, Georgia and Turkey — relatively affordable, nearby countries that allow Russians to enter without visas. In Europe, countries like Germany and Latvia took in Russians fearing persecution at home.