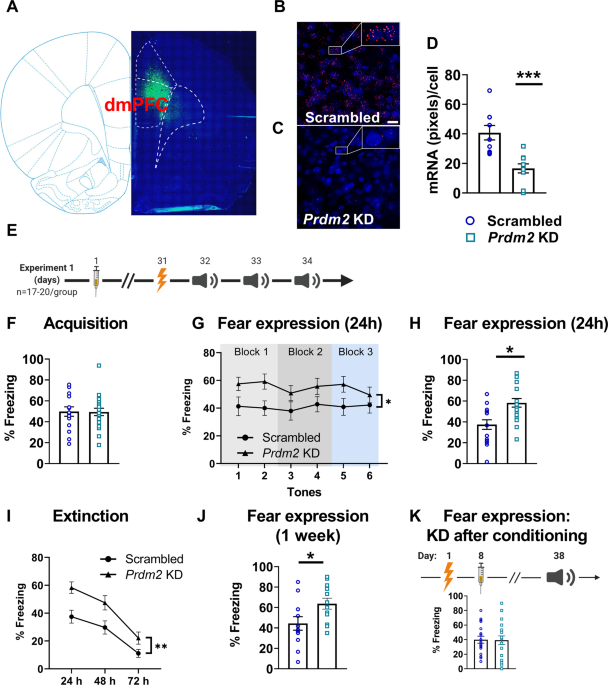 An epigenetic mechanism for over-consolidation of fear memories

Excessive fear is a hallmark of anxiety disorders, a major cause of disease burden worldwide. Substantial evidence supports a role of prefrontal cortex-amygdala circuits in the regulation of fear and anxiety, but the molecular mechanisms that regulate their activity remain poorly understood. Here, we show that downregulation of the histone methyltransferase PRDM2 in the dorsomedial prefrontal cortex enhances fear expression by modulating fear memory consolidation. We further show that Prdm2 knock-down (KD) in neurons that project from the dorsomedial prefrontal cortex to the basolateral amygdala (dmPFC-BLA) promotes increased fear expression. Prdm2 KD in the dmPFC-BLA circuit also resulted in increased expression of genes involved in synaptogenesis, suggesting that Prdm2 KD modulates consolidation of conditioned fear by modifying synaptic strength at dmPFC-BLA projection targets. Consistent with an enhanced synaptic efficacy, we found that dmPFC Prdm2 KD increased glutamatergic release probability in the BLA and increased the activity of BLA neurons in response to fear-associated cues. Together, our findings provide a new molecular mechanism for excessive fear responses, wherein PRDM2 modulates the dmPFC -BLA circuit through specific transcriptomic changes.

Normal fear elicits adaptive responses aimed at escaping life-threatening events [1, 2]. In contrast, excessive fear responses become maladaptive and are characteristic of fear-related disorders such as post-traumatic stress disorder and several anxiety disorders [3]. Pathology of memory processes involved in learned fear can lead to amplified behavioral responses that fail to extinguish despite the absence of a relevant threat [4]. Identifying the neural circuits and molecular mechanisms underlying excessive fear memory may identify molecular pathways that can be targeted by mechanistic treatments.