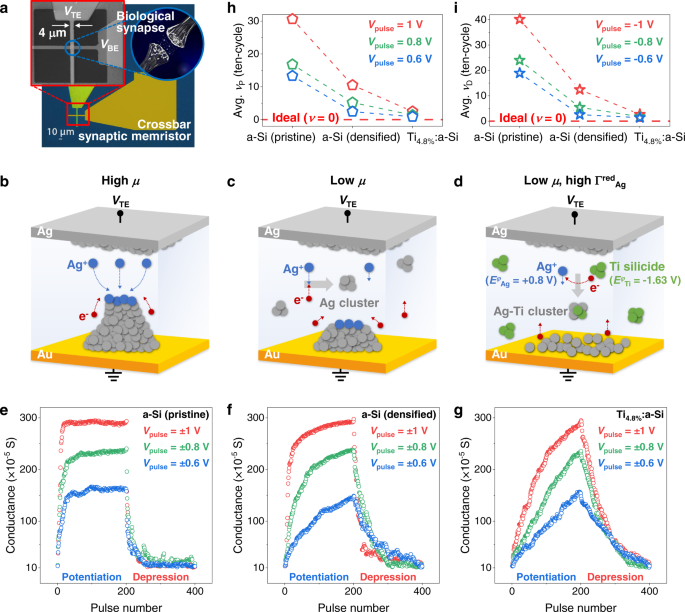 Memristors, or memristive devices, have attracted tremendous interest in neuromorphic hardware implementation. However, the high electric-field dependence in conventional filamentary memristors results in either digital-like conductance updates or gradual switching only in a limited dynamic range. Here, we address the switching parameter, the reduction probability of Ag cations in the switching medium, and ultimately demonstrate a cluster-type analogue memristor. Ti nanoclusters are embedded into densified amorphous Si for the following reasons: low standard reduction potential, thermodynamic miscibility with Si, and alloy formation with Ag. These Ti clusters effectively induce the electrochemical reduction activity of Ag cations and allow linear potentiation/depression in tandem with a large conductance range (~244) and long data retention (~99% at 1 hour). Moreover, according to the reduction potentials of incorporated metals (Pt, Ta, W, and Ti), the extent of linearity improvement is selectively tuneable. Image processing simulation proves that the Ti4.8%:a-Si device can fully function with high accuracy as an ideal synaptic model.

After the experimental demonstration of the two-terminal metal-insulator-metal (MIM) structure memristive system in 20081, extensive research on nanoscale resistive switching devices has been conducted in diverse fields of application, from digital-based logic and memory2,3,4,5 to analogue-based artificial synaptic elements for neuromorphic computing6,7,8,9,10. The crossbar-structured memristors or memristive devices (throughout the paper, we use the term “memristor” to refer to a memristive device in short) in Fig. 1a exhibited prospective capabilities in computing tasks, such as signal processing and image recognition with experimental demonstrations4,11,12. Conductive-bridge random access memory (CBRAM) is a type of memristor which utilises the redox and ion migration process of active metals to form or rupture conductive filaments (CFs), resulting in resistance changes2,8,13. The engineering of various materials and structures of CBRAM has been attempted to improve its characteristics after the early demonstration of analogue synaptic behaviours10; switching performance variation was minimised by the one-dimensional CF confinement effect9, sub-femtojoule power consumption was achieved by the formation of atomically thin CF14, and retention time was improved through filament interfacial energy stabilisation15. However, limited improvements have been made for analogue linearity and dynamic range, only showing on/off ratios typically less than 10 in the analogue switching region16. Few studies achieved high on/off ratios in analogue CBRAM by applying large voltage pulses, yet the linearity significantly deteriorated to almost digital-like switching9,17,18,19. This trade-off between linearity and on/off ratio strongly originates from the positive feedback effect in an electric field during the filament growth process, where the electric field induces exponential ionic migration toward the depleted filament region2,13,20,21,22. A memristor with a linear conductance update and a large on/off ratio is highly challenging to realise and yet to be developed but is desired for superior performance in neuromorphic computing4,6,16.