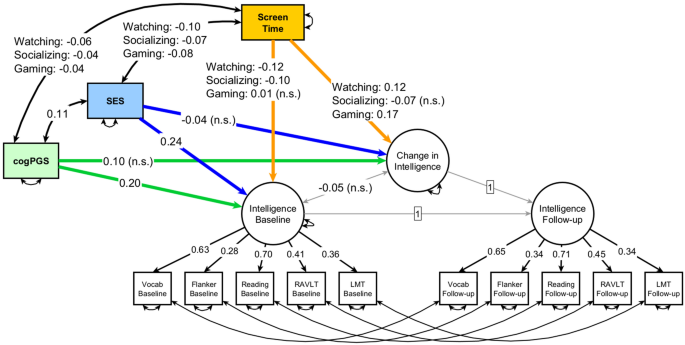 Digital media defines modern childhood, but its cognitive effects are unclear and hotly debated. We believe that studies with genetic data could clarify causal claims and correct for the typically unaccounted role of genetic predispositions. Here, we estimated the impact of different types of screen time (watching, socializing, or gaming) on children’s intelligence while controlling for the confounding effects of genetic differences in cognition and socioeconomic status. We analyzed 9855 children from the USA who were part of the ABCD dataset with measures of intelligence at baseline (ages 9–10) and after two years. At baseline, time watching (r = − 0.12) and socializing (r = − 0.10) were negatively correlated with intelligence, while gaming did not correlate. After two years, gaming positively impacted intelligence (standardized β =  + 0.17), but socializing had no effect. This is consistent with cognitive benefits documented in experimental studies on video gaming. Unexpectedly, watching videos also benefited intelligence (standardized β =  + 0.12), contrary to prior research on the effect of watching TV. Although, in a posthoc analysis, this was not significant if parental education (instead of SES) was controlled for. Broadly, our results are in line with research on the malleability of cognitive abilities from environmental factors, such as cognitive training and the Flynn effect.

Rapid technological progress has shaped modern childhood. Time spent with digital devices has increased dramatically since the start of our twenty-first century1,2 and is now a large portion of a child’s free time3. Children aged 8–12, for example, spend an average of 4–6 h with a screen each day watching videos, gaming, and socializing1,4. Digital media bring a variety of new experiences that could have both benefits and drawbacks to the developing minds of children5. This topic is a source of heated public debates6 and deserves careful attention from policymakers and researchers.