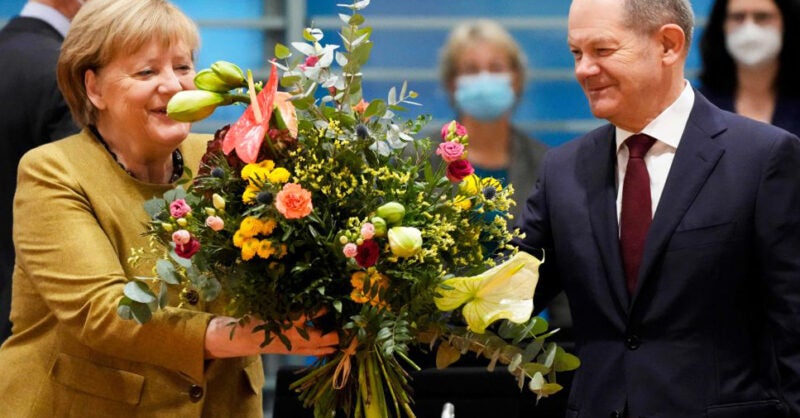 A pragmatic, unflashy former mayor of Hamburg, Olaf Scholz is not usually one for gestures. Yet there were bursts of symbolism in the announcement this afternoon (24 November) of a successful three-party coalition deal between his Social Democrats (SPD), the Greens and the conservative-liberal Free Democrats (FDP) that confirms that he will succeed Angela Merkel as Germany’s chancellor, most probably in the week of 6 December.

The event took place in a converted warehouse at the Westhafen, a port area on Berlin’s industrial canal network still marked by cranes and train tracks, and now home to a trendy emerging art scene. The new government, went the message, is all about the future. It is known as the “traffic-light” coalition as the colours of the three parties are red, green and yellow. Scholz picked up on that, too, noting that a pioneering new traffic light was installed in 1924 in Berlin’s Potsdamer Platz; a symbol of both innovation and reliability. Then there was the title of the coalition deal itself, “dare more progress”, an obvious nod to the slogan “dare more democracy” under which the SPD federal chancellor Willy Brandt ushered in a period of modernisation from 1969.

To be sure, it was a sober occasion. Scholz and the other speakers began their remarks by noting the alarming rise in Covid-19 cases in Germany and indicating the priority the new government would accord the battle to bring down numbers.