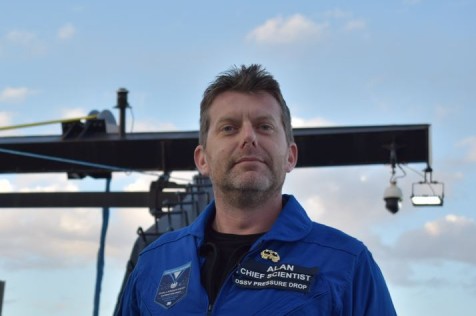 T here are two ways to explore the ocean miles below the surface. Some deep-sea scientists favor tools that can be operated from above, like remote probes and autonomous vehicles. This is the cheaper, safer, and arguably more sane option, which also offers more time at the bottom. And then there are those who advocate for the more dangerous, much more expensive, and inarguably more observational method, which involves packing humans into a roughly port-a-potty-sized space in a submersible and plunging them into the dark.

In the 2010s, Alan Jamieson would have championed the first as a more data-driven way of studying his area of focus—the deepest ocean trenches called hadal zones. But that changed when he began working as chief scientist for Five Deeps, American millionaire Victor Vescovo’s project to reach the deepest point in each of the planet’s oceans.

“I came into sub dives too scientifically,” says Jamieson, now a professor at the University of Western Australia. “I wanted good quality data, while Victor Vescovo and his team wanted to reach the deepest point.” It took most of the Five Deeps dives for us to realize we were both right,” and that each approach had its merits.