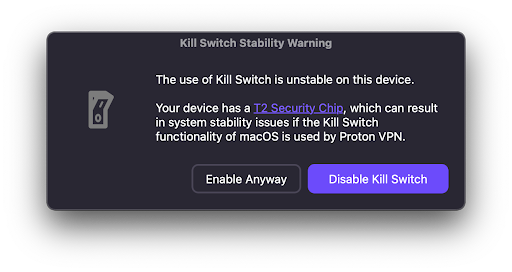 The Apple T2 security chip was designed to improve the security of macOS and can be found on some Mac computers that use Intel processors. Unfortunately, this chip is also responsible for a number of stability problems on macOS when our kill switch feature is enabled.

Most notably, the macOS operating system may crash and restart when your device is coming out of sleep while the kill switch is enabled. This will not permanently damage your computer, but it does introduce the real risk of data loss.

With the release of macOS Catalina, Apple introduced an official kill switch feature for VPN users. However, when Proton VPN adopted this OS feature, it quickly became apparent that its use led to system crashes on macOS for devices equipped with the T2 Security Chip.

The issue affects Intel-based Macs equipped with the T2 chip regardless of the VPN protocol used, whether one of Proton’s custom protocol implementations (OpenVPN and WireGuard) or Apple’s native IKEv2 implementation.