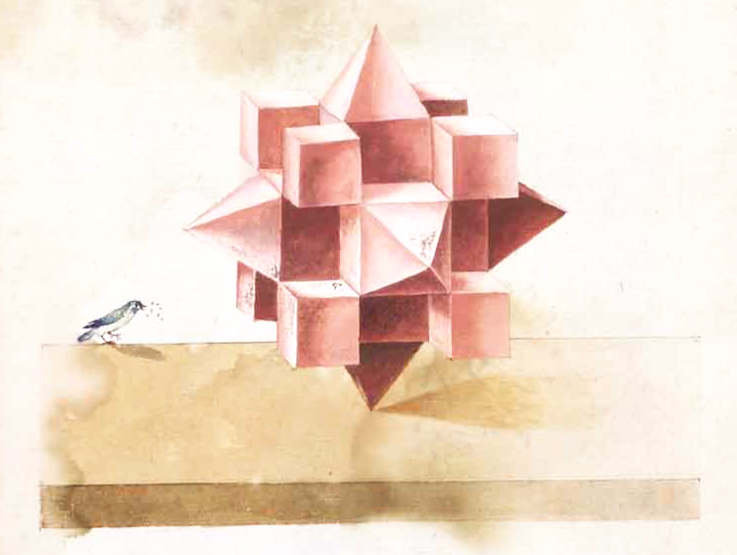 This sequence of increasingly complex geometrical figures and perspective drawings — collected in a sixteenth-century watercolor manuscript and preserved at the Herzog August Bibliothek in Wolfenbüttel — comes with no author's note, editor's preface, or running commentary. We know very little about its origins. All we have are shapes and color, with the occasional totem (eagle, rooster, and even a putto holding something like a pinwheel) dwarfed by the immensity of lines and angles.

When compared to other geometric images contemporary to the manuscript, it inhabits a middle ground between the sober studies found in Augustin Hirschovogel's Geometria (1543) and Lorenz Stoer's ethereal geometric landscapes (1567). While the manuscript remains a mystery, certain pages share a strong resemblance to the etchings by Jost Amman for Nuremberg goldsmith Wenzel Jamnitzer's Perspectiva corporum regularium (1568) — and one image bears the inscription "Geometria et Perspectiva Corporum Regularium" (Geometry and Perspective of the Regular Bodies), though this was a somewhat common descriptive name for studies of this kind.

Indeed, the manuscript displays the German Renaissance fascination for geometrical solids demonstrated by Jamnitzer, Albrecht Dürer, Johannes Kepler, and Hans Lencker, which paralleled similar experiments in Italy conducted by Piero della Francesca, Paolo Uccello, Leonardo da Vinci, and several others — part of a larger "rise of perspective" in visual art and the renewed mathematical fascination with polyhedra. According to Thomas Christensen, it was thought that one could derive, from geometric solids, "God's secret design for the universe".