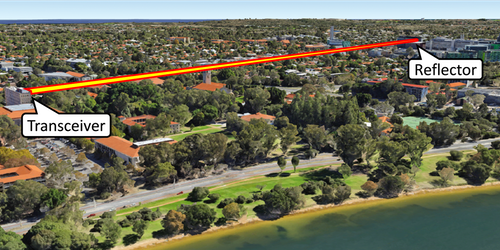 To look for cracks in the general theory of relativity, researchers want to compare—with unprecedented precision—the ticking of two atomic clocks, one on Earth and one in space. An ultrastable laser link will be needed for the ground-to-satellite communication, and now a team has sent a laser beam 2.4 km through air with its frequency stable at the level of 6 parts in 1021 for a 5-minute measurement time [1]. This result represents a 100-fold improvement over previous efforts and demonstrates 1000 times higher stability than the best atomic clocks.

General relativity isn’t compatible with quantum mechanics, and finding violations of relativity’s predictions could point the way toward a quantum theory of gravity. According to general relativity, a clock that is higher up in a gravitational field ticks faster than one that is lower down. In 2018, researchers reported a test of this so-called gravitational redshift prediction using atomic clocks onboard two satellites with elliptical orbits. They recorded tiny frequency shifts attributable to changes in altitude, which provided a relativity test with a precision of about one part in 100,000 [2].

For higher precision, researchers would like to compare a clock on Earth with one in space. “Of course, you can't run fiber optic cable to a satellite,” says David Gozzard, of the University of Western Australia (UWA), Perth. Instead, the two clocks need to be connected by a laser beam transmitted through the atmosphere.