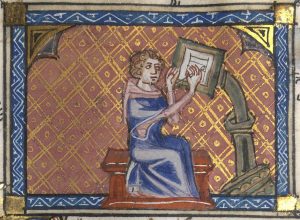 Fronto’s Writing Advice to Aurelius: One Thought Should Follow Through to the Next

“Many of my readers may perhaps hate my subject from the title because it is impossible for anything serious to be made of smoke and dust. But you, thanks to your outstanding intelligence, will judge whether these words are wasted or put well.

The subject does, however, seem to ask for a few things to be written about the logic of its composition, since nothing written of this kind of thing noble enough in the Roman tongue exists except for what poets touch in comedies or farces. Anyone who tests himself at writing of this kind will select a mass of ideas and put them together closely, joining them cleverly, but without including many useless and doubled words and then make sure to end each sentence with clarity and skill.

In legal speeches, however, it goes differently because we often pay special attention to sentences ending harshly and artlessly. In this matter, we must labor differently so that nothing is left rude and out of place, instead making sure that everything is interconnected as in a robe with clear borders and ornate edges. Finally, just as the final verses in epigrams should have some kind of shine to them, a sentence should be ended with some kind of a clasp or brooch.

Pleasing the audience, however, should pursued among the first goals. For this kind of address is not composed for defense in a capital trial nor to advocate for the passing of a law, nor to exhort an army, nor to enrage a mass of people, but for delights and pleasure. Nevertheless, we must speeches we do about serious and wonderful things—the small matters must be compared and equaled to great ones. And, finally, the greatest virtue in this kind of speech is the conceit of seriousness. Stories of the gods or heroes should be interwoven where they fit. At he same time, lines of poetry which pertain applicable proverbs, and even clever fictions, as long as the fiction is added by some kind of clever argument.