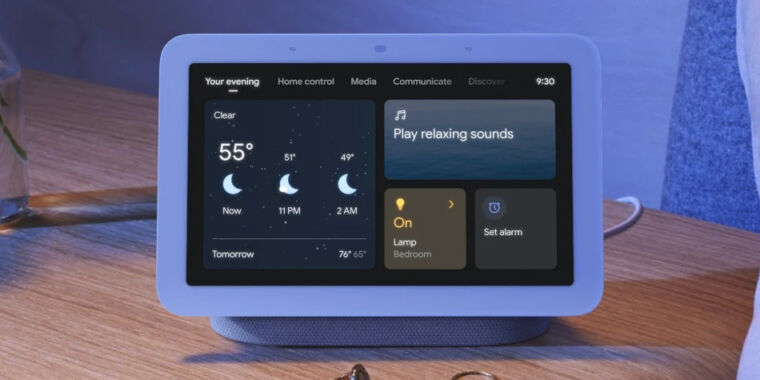 Google's up-and-coming Fuchsia OS has reached another milestone. According to a report from 9to5Google's Kyle Bradshaw (the Internet's premiere Fuchsia resource), the new OS is rolling out to all first-gen Google Nest Hubs. The OS launched in May but only to a select few devices in the preview program.

The first-gen Google Nest Hub (which launched as the "Google Home Hub" and was later renamed) has always had a strange OS story. The smart display launched in 2018 with an OS based on the Google Cast platform at a time when Google was pushing partners to ship displays with Android Things, an Internet-of-things OS based on Android. Today, Android Things is dead—at least, as a public platform—and there's not much future in turning the simple Google Cast Platform into a smart display. The Fuchsia team, which has been experimenting on the Home Hub for years, apparently commandeered the project and started rolling out the new OS.

You can check if you have Fuchsia by going to the "About" page in the settings. If there's an "Operating System Version" field at the bottom, you're running Fuchsia. You won't notice any differences, though. The Google smart display UI is written in Flutter, which can run on both Fuchsia and the Google Cast OS, so everything you interact with comes from the same code base. Google just quietly replaced the underlying OS.