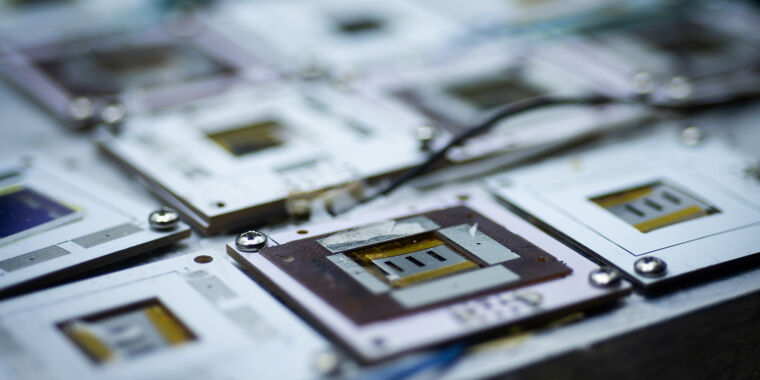 While silicon-based solar cells dominate the photovoltaics market, silicon is far from the only material that can effectively harvest electricity from sunlight. Thin-film solar cells using cadmium and telluride are common in utility-scale solar deployments, and in space, we use high-efficiency cells that rely on three distinct materials to harvest different parts of the spectrum.

Another class of materials, which we're currently not using, has been the subject of extensive research: perovskites. These materials are cheap and incredibly easy to process into a functional solar cell. The reason they're not used is that they tend to degrade when placed in sunlight, limiting their utility to a few years. That has drawn the attention of the research community, which has been experimenting with ways to keep them stable for longer.

In Thursday's edition of Science, a research team from Princeton described how they've structured a perovskite material to limit the main mechanism by which it decays, resulting in a solar cell with a lifetime similar to that of silicon. While the perovskite cell isn't as efficient as what is currently on the market, a similar structure might work to preserve related materials that have higher efficiencies.