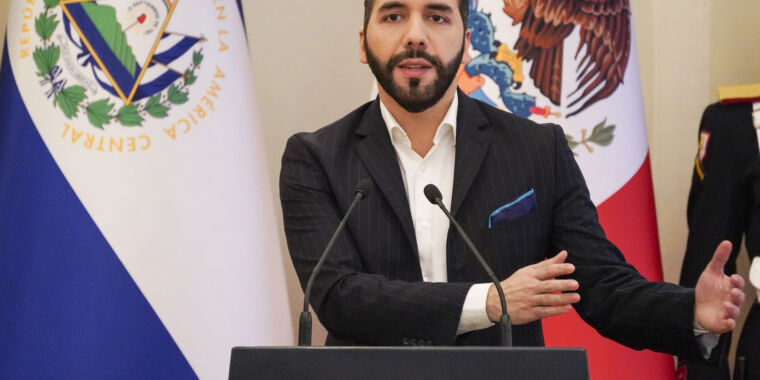 Bitcoin's price has plunged in recent days, briefly falling below $30,000 on Monday evening and again on Wednesday morning. Nayib Bukele, the bitcoin-boosting president of El Salvador, sees bitcoin's low price as a buying opportunity. He announced on Monday that El Salvador had purchased another 500 bitcoin. With one bitcoin worth around $31,000, this represented a $15.5 million bet.

Bukele has made the embrace of bitcoin a signature of his presidency. Last year, El Salvador became the first nation in the world to make bitcoin legal tender alongside the US dollar. In an effort to encourage adoption of bitcoin, El Salvador launched wallet software called Chivo and offered Salvadorans $30 if they gave it a try.

Bloomberg calculates that El Salvador has accumulated a total of 2,301 bitcoins since it started buying them last September. Most were bought at prices above $45,000, so this nation of 6 million people has lost tens of millions of dollars speculating on bitcoin.

The government of El Salvador is heavily in debt and has an $800 million debt payment coming due in January. Last week, ratings agency Moody's downgraded El Salvador's debt, warning that the Central American nation may be forced to default. El Pais reports that Salvadoran bonds are trading at around 40 percent of their face value, a sign that traders see this as a serious risk.