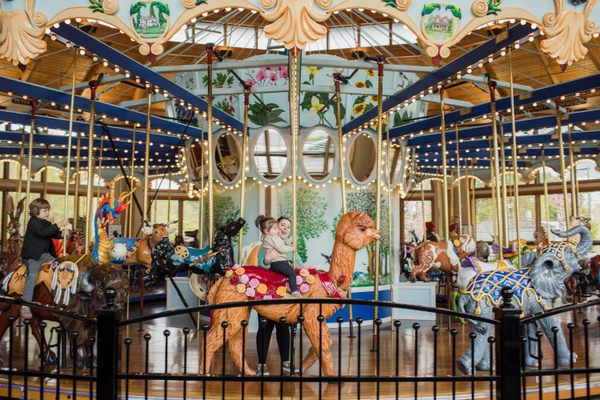 The Carousel that Saved a Town

Entering the octagonal brick building that houses Albany, Oregon’s carousel is like stepping into a children’s picture book. Tinkly, tinny music flush with cymbal and piano strikes fills the air. Lights dance off the mirrors that decorate the carousel, reflecting swirls of color as a fantastical menagerie spins on the platform: a grizzly bear sporting glasses, a fierce Chinese Foo dog named “Friend,” a Pegasus carrying fairy passengers. And the people who did it all—those who built this carousel and crafted all its animals by hand over the course of 20 years—are there too. They’re smiling, handing out tickets, beaming with pride.

Wendy Kirbey first conceived of building a carousel in Albany after a vacation in Missoula in 2002. There, she delighted in a carousel and wondered, if this childhood treasure could revitalize Missoula, why couldn’t it do the same for her hometown? Albany, with a population of 53,000, lies in the Willamette Valley 70 miles south of Portland. Like many small towns, it had lost its local restaurant and retail traffic to a suburban mall. One downtown business after another was closing its doors, and as Kirbey remembers, “It was becoming seedy.”

Kirbey talked the idea over with her husband, Gordon, and declared, “I know what this town needs!” She was going to build a carousel in Albany.