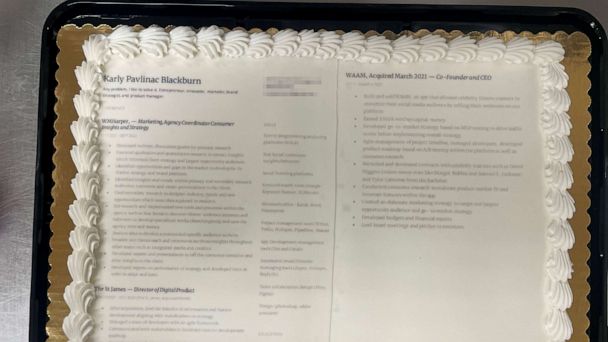 Amid a growing sea of creative, well-qualified applicants, 27-year-old Karly Pavlinac Blackburn stood out from the competition with a resume sheet cake that she had hand-delivered last fall to Nike headquarters via Instacart delivery, which was a catalyst for a number of career conversations.

"I will be the director of growth marketing at a software startup called CureMint -- we make software that helps dental companies automate their business," Pavlinac told "Good Morning America" of her new role, which she starts on Monday. "To be on the other side of the job hunt feels good. It has definitely been a roller coaster with the virality of the LinkedIn post."

Pavlinac said that after posting about her "resume cake" on LinkedIn, her story went viral, opening up "lot of doors to have conversations with people at companies all over the country."