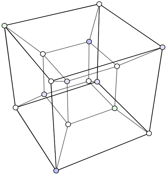 Even though I am one of the founders of the MathWorks, I only acted as an advisor to the company for its first five years. During that time, from 1985 to 1989, I was trying my luck with two Silicon Valley computer startup companies. Both enterprises failed as businesses, but the experience taught me a great deal about the computer industry, and influenced how I viewed the eventual development of MATLAB. The first of these startups developed the Intel Hypercube.

In 1981, Caltech Professor Chuck Seitz and his students developed one of the world's first parallel computers, which they called the Cosmic Cube. There were 64 nodes. Each node was a single board computer based on the Intel 8086 CPU and 8087 floating point coprocessor. These were the chips that were being used in the IBM PC at the time. There was room on the board of the Cosmic Cube for only 128 kilobytes of memory.

Seitz's group designed a chip to handle the communication between the nodes. It was not feasible to connect a node directly to each of the 63 other nodes. That would have required $64^2 = 4096$ connections. Instead, each node was connected to only six other nodes. That required only $6 \times 64 = 384$ connections. Express each node's address in binary. Since there are $2^6$ nodes this requires six bits. Connect a node to the nodes whose addresses differ by one bit. This corresponds to regarding the nodes as the vertices of a six-dimensional cube and making the connections along the edges of the cube. So, these machines are called "hypercubes".