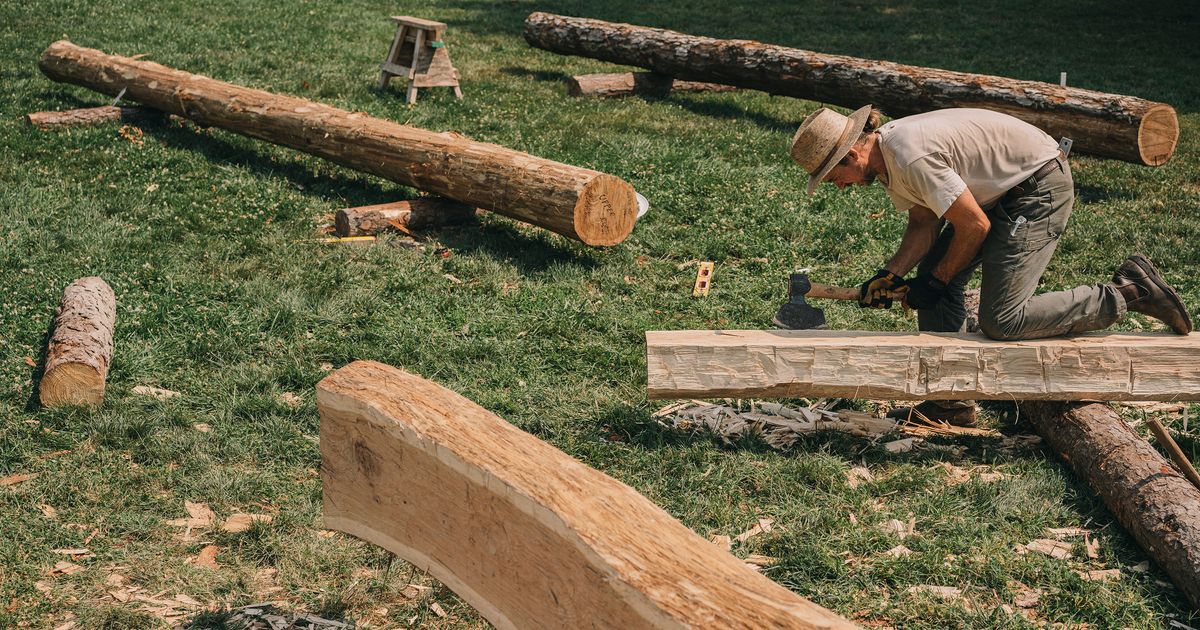 Some Tree Buffs in D.C. Took It Upon Themselves to Help Rebuild Notre-Dame

“I started getting calls as soon as the fire was put out,” said Rick Brown, standing on the lawn at Catholic University the other day. Brown and his wife, Laura, are the co-founders of Handshouse Studio, an educational nonprofit that replicates large historical objects using the precise techniques with which they were built. In 2011, he led a trip to Poland to rebuild by hand the Gwoździec synagogue, raised in the 17th century and then razed by the Nazis. This time, the calls were about a much bigger house of worship: the Cathedral of Notre-Dame de Paris, nearly swallowed by an inferno in April 2019. Today, he and his tribe were here with hand axes. A few miles away, on Capitol Hill, Congress was metaphorically hammering out a way to rebuild infrastructure; here, these master builders and apprentices were literally doing the same. The giant oak logs laid out here would soon, perhaps, become hand-hewn pieces of a church.

In the final pages of The Hunchback of Notre Dame, when Quasimodo scrambles through the rafters of his lair, Victor Hugo wrote in 1831 of the “prodigious timber-work so dense it was called ‘the forest.’” La forêt was a latticework constructed from over 1,300 oak trees, mostly in the 12th century. An electrical short probably started the fire; by the time it was finally extinguished, the cathedral’s twin towers and flying buttresses held, but la forêt and the spire went up like the Hindenburg. Even before the smoke cleared, a debate burst forth about how Notre-Dame would be restored. As Hugo wrote, “Each face, each stone of the venerable monument, is a page not only of the history of the country, but of the history of science and art.” Suddenly, modernists were jockeying to impose some glass-and-steel devilry atop the old dame. One firm proposed rebuilding the roof using plastic recycled from the ocean. Another wanted to put a swimming pool up there. Just imagine how Hugo, who decried the modest cosmetic tweaks to the building done in his time — “In the name of ‘good taste,’ fashion has clapped on the wounds of Gothic architecture the wretched gewgaws of the day,” he wrote — would react to seeing the cathedral transmogrified into a branch of Soho House.