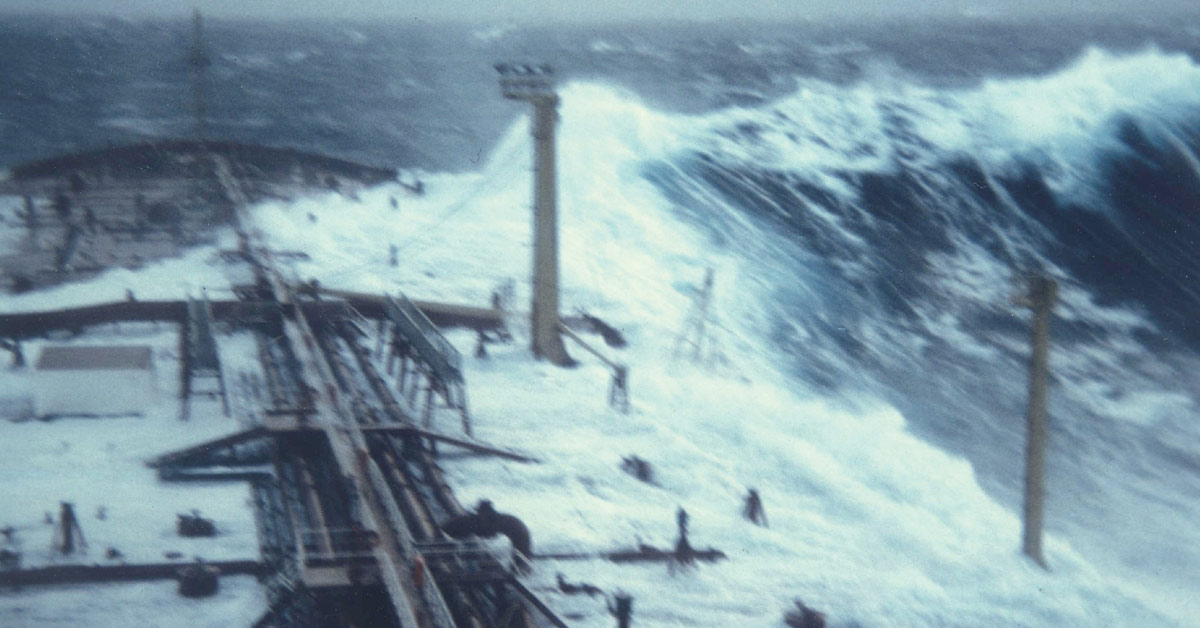 This image is one of the only photographs ever taken of what is known as a “rogue wave,” a type of oceanic phenomenon often described anecdotally by mariners, but until recently thought by the scientific community to be a practical impossibility. Taken by Philippe Lijour, the first mate of the supertanker Esso Languedoc, during a storm off Durban, South Africa in 1980, the photo records a wall of water the size of an eight-story building crashing over the deck of the ship. (For reference, the mast seen at the back of the photo stands 25 meters above mean sea level). While it was long understood that extraordinarily severe weather conditions or certain geological phenomena like undersea earthquakes could produce waves of enormous size, neither of these conditions were present when the wave that hit the Esso Languedoc occurred. In fact, the mean wave height at the time was only 5 to 10 meters. According to the longstanding method of ocean wave forecasting known as the Linear Model, the emergence of such a monster wave from this type of overall sea state could be expected to occur only once every 10,000 years. This is much more than a theoretical issue—indeed, everything from the predictions of sea conditions by meteorologists relied upon by mariners to the very fundamentals of ship design have been based on the idea that the largest waves one could expect to encounter would, on average, be somewhere around 15 meters high. In the last five years, scientists around the world, coordinated by the European Space Agency and other organizations, have been working in collaboration to study the phenomenon of rogue waves using satellite imaging and concepts from quantum physics like Schrödinger’s equation, which describes the probability of certain types of non-linear phenomena. The results of this research are still being assembled, but the initial findings suggest that freak waves such as the one that struck Lijour’s vessel are much more common that previously thought, a conclusion that is already finding its way into the design and construction of the large ocean-going vessels that carry so much of the world goods.