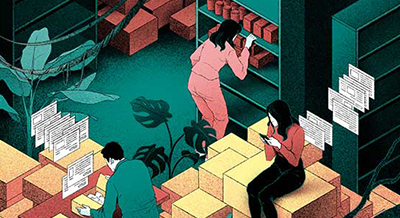 In this report, Moira Weigel tells the story of a group of hidden intermediaries who have played key roles in making Amazon one of the most powerful corporations in the world, while remaining mostly invisible to customers: third-party (3P) sellers.

Critics of Amazon’s monopoly have often emphasized how the company eliminates competition. This report highlights how Amazon’s scale has also given rise to new kinds of small businesses — ones optimized for Amazon. Industry analysts estimate that, in 2021, there were more than 6 million unique sellers active on Amazon and that at least 2,000 new sellers opened accounts every day.* To these sellers, Amazon holds forth the possibility of a trickle-down monopoly. But to seize the opportunities of Amazon’s global expansion involves considerable vulnerability. To succeed, 3P sellers must behave like miniature Amazons — without access to the capital that Amazon commands, insight into much of the company’s data, or the ability to make claims when they suffer harm.

Weigel establishes a typology and chronology of Amazon sellers, and explores the ambivalent realities of building a “small business” under the conditions that Amazon has created and controls. She argues that Amazon’s dominance of online search and global logistics has not ( only)  hurt or helped small businesses so much as transformed them. Drawing on hundreds of hours of interviews with sellers in North America, China, and Southeast Asia, Weigel reveals how Amazon’s platform has restructured the social relations that comprise the global retail industry and set new rules for conducting business.