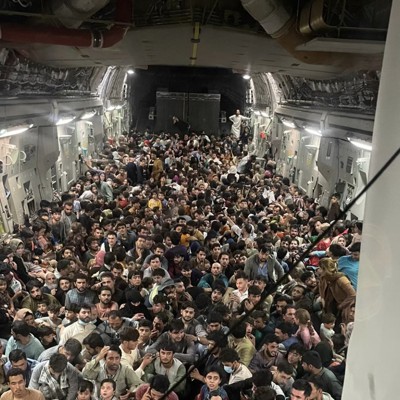 Inside Reach 871, A US C-17 Packed With 640 Afghans Trying to Escape the Taliban

A U.S. Air Force C-17 Globemaster III safely evacuated some 640 Afghans from Kabul late Sunday, according to U.S. defense officials and photos obtained by Defense One.

That’s believed to be among the most people ever flown in the C-17, a massive military cargo plane that has been operated by the U.S. and its allies for nearly three decades. Flight tracking software shows the plane belongs to the 436th Air Wing, based at Dover Air Force Base in Delaware.

The C-17, using the call sign Reach 871, was not intending to take on such a large load, but panicked Afghans who had been cleared to evacuate pulled themselves onto the C-17’s half-open ramp, a video posted late Sunday showed.