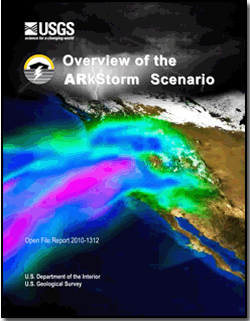 An ARkStorm (for atmospheric river 1,000 storm) is a hypothetical but scientifically realistic "megastorm" scenario developed and published by the Multi Hazards Demonstration Project (MHDP) of the United States Geological Survey, based on historical occurrences. It describes an extreme storm that could devastate much of California, causing up to $725 billion in losses (mostly due to flooding), and affect a quarter of California's homes. The event would be similar to exceptionally intense California storms that occurred between December 1861 and January 1862, which dumped nearly 10 feet of rain in parts of California, over a period of 43 days.[1][2] The name "ARkStorm" means "atmospheric river (AR) 1,000 (k)" as the storm was originally projected as a 1-in-1000-year event.[3]

The USGS sediment research in the San Francisco Bay Area, Santa Barbara basin, Sacramento Valley, and Klamath Mountain region have indicated that "megastorms" similar to the ARkStorm scenario have occurred in the following years A.D.: 212, 440, 603, 1029, c. 1300, 1418, 1605, 1750, 1810, and December 1861–January 1862 (the latest occurrence). Based on the intervals of known occurrences, ranging from 51 to 426 years, scientists have concluded that these events have a mean return period of around 150–200 years.[1] Geologic evidence also indicates that several of the previous events were more intense than the one in 1861–62, particularly the events in 440, 1418, 1605, and 1750, each of which deposited a layer of silt in the Santa Barbara Basin more than one inch thick. The largest event was the one in 1605, which left behind a layer of silt two inches thick, indicating that this flood was at least 50% more powerful than any of the others recorded. The floods more intense than the 1861–62 event appear to occur at intervals of 200 years or so.[1]