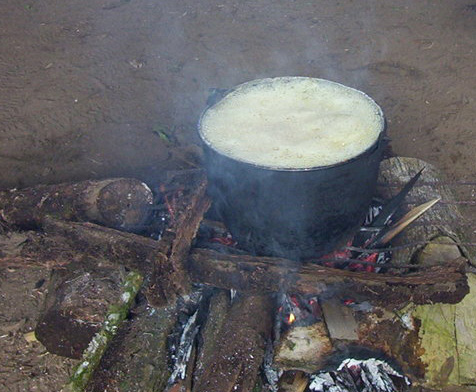 Ayahuasca[note 1] is a South American (pan-Amazonian)[1] psychoactive brew used both socially and as ceremonial spiritual medicine among the indigenous peoples of the Amazon basin.[2][3] It is a psychedelic and entheogenic brew commonly made out of the Banisteriopsis caapi vine, the Psychotria viridis shrub or a substitute, and possibly other ingredients;[4] however, a chemically similar preparation, sometimes called "pharmahuasca", can be prepared using N,N-Dimethyltryptamine (DMT) and a pharmaceutical monoamine oxidase inhibitor (MAOI), such as isocarboxazid.[5][6] B. caapi contains several alkaloids that act as MAOIs, which are required for DMT to be orally active.[7] Ayahuasca is prepared in a tea that, when consumed, causes an altered state of consciousness or "high", including visual hallucinations and altered perceptions of reality.[8]

The other required ingredient is a plant that contains the primary psychoactive, DMT. This is usually the shrub P. viridis,[7] but Diplopterys cabrerana may be used as a substitute.[9][10] Other plant ingredients often or occasionally used in the production of ayahuasca include Justicia pectoralis,[11] one of the Brugmansia (especially Brugmansia insignis and Brugmansia versicolor, or a hybrid breed) or Datura species,[12] and mapacho (Nicotiana rustica).[13]