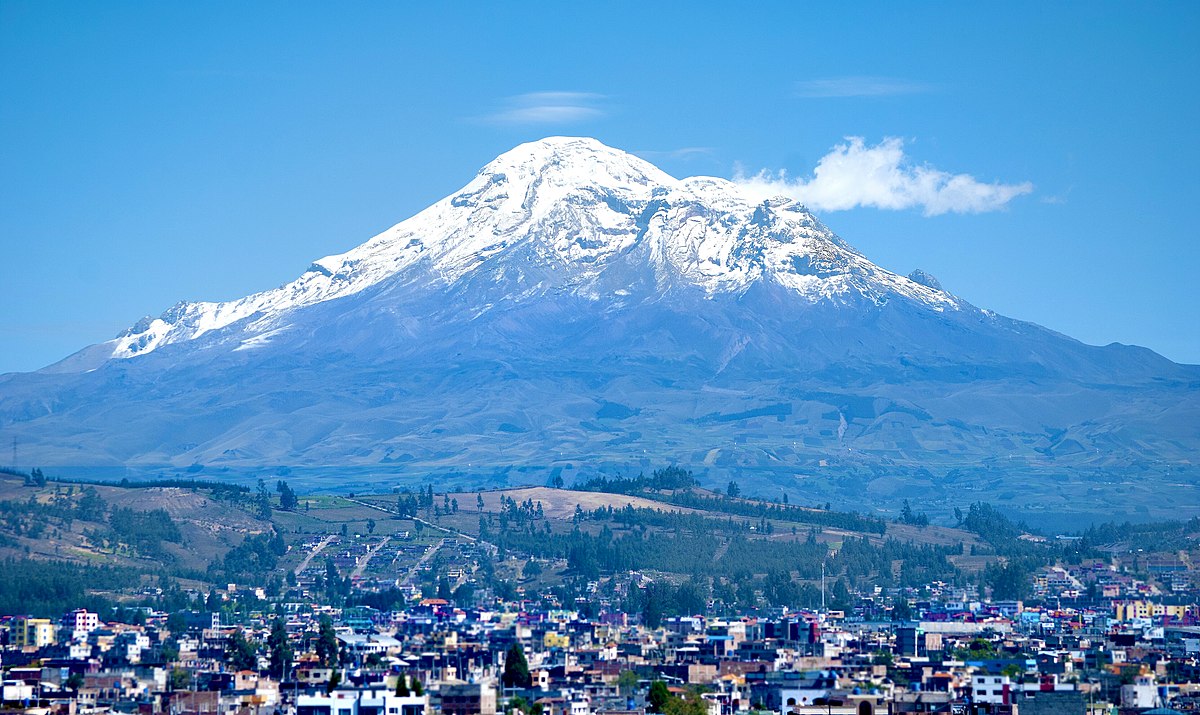 Chimborazo (Spanish pronunciation: [tʃimboˈɾaso] ( listen ) ) is a currently inactive stratovolcano in the Cordillera Occidental range of the Andes. Its last known eruption is believed to have occurred around 550 A.D.[4]

Chimborazo's summit is the farthest point on the Earth's surface from the Earth's center, given that it is located along the planet's equatorial bulge.[5] This is despite not being the tallest mountain in the Andes or on Earth. Based on the average global sea level, the height of Chimborazo is 6,263 m (20,548 ft), well below the height of Mount Everest (8849 metres). Nevertheless, Chimborazo is the highest mountain in Ecuador and the 39th highest peak in the Andes.[6]

Chimborazo is a popular destination for mountaineering as its climbing routes are considered challenging and take place on snow, ice, and rock, often requiring crampons and other technical climbing equipment.

Several theories regarding the origin of the name Chimborazo exist. In many dialects of Quichua or Quechua, "chimba" means "on the other side" as in "on the other side of the river" or "on the opposite bank." Other dialects pronounce this word "chimpa." Also, "razu" means "ice" or "snow." Local Quichua speakers will say that Chimborazo is a Hispanicized pronunciation of "chimbarazu," meaning "the snow on the other side."[7] Another theory suggests it is a combination of the Cayapa Schingbu for Women and the Colorado/Quichua Razo for Ice/Snow resulting in Women of Ice. According to another, Chimbo is Jívaro for Throne of Master/God resulting in Icethrone of God. The locals also used to call the mountain Urcurazu, with the Quichua Urcu for Mountain resulting in Mountain of Ice.[8] In local indigenous mysticism, Chimborazo represents Taita (Father) whereas neighbouring Tungurahua is seen as Mama, and Guagua (Child) for Pichincha hence Taita Chimborazo, Mama Tungurahua and Guagua Pichincha.