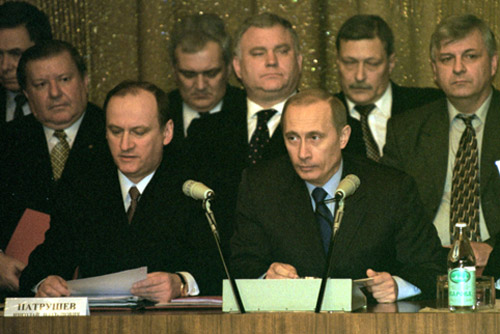 Counterintelligence state (sometimes also called intelligence state, securocracy or spookocracy) is a state where the state security service penetrates and permeates all societal institutions, including the military.[1][2][3][4][5][6][7] The term has been applied by historians and political commentators to the former Soviet Union, the former German Democratic Republic, Cuba after the 1959 revolution, Iraq under Saddam Hussein, China, and post-Soviet Russia under Vladimir Putin, especially since 2012.

According to one definition, "The counterintelligence state is characterized by the presence of a large, elite force acting as a watchdog of a security defined as broadly that the state must maintain an enormous vigilance and enforcement apparatus... This apparatus is not accountable to the public and enjoys immense police powers... Whether the civilian government is able to control the security bodies is an open question; indeed the civilian government is so penetrated by the apparatus that there is no clear distinction between the two."[4]

In some cases, securocracies feature literal, direct rule of the state by officials originating from the secret police - as it was, for instance, in the USSR under Lavrentiy Beria and Yuri Andropov, and as it is in Russia under Vladimir Putin.