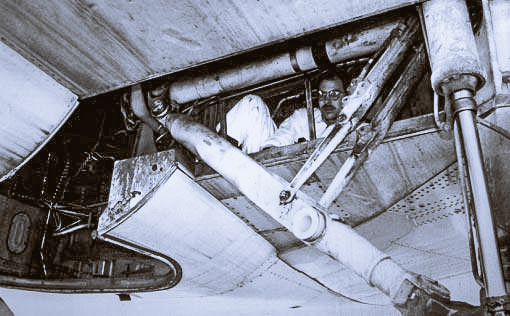 This is a list of known flights with stowaways who traveled inside the wheel well (landing gear compartment, also known as wheel bay, or undercarriage) of an aircraft. Between 1947 and June 2015, a U.S. Federal Aviation Administration (FAA) researcher had documented 113 such attempts on 101 flights. These 113 people were all male and predominantly under age 30.[1] There were 86 deaths, a 76 percent fatality rate,[2] with many unidentified decedents. There may be additional undocumented cases of wheel-well stowaways.[3]

Wheel-well stowaways face considerable risk of death during all phases of flight. Some have been unable to remain in the well during takeoff and landing and have fallen to their death. Immediately after takeoff, the landing gear retracts into the wheel wells, with the potential to crush the stowaway.[4] If the stowaway is able to avoid physical injury, they still face hypothermia and hypoxia risks at the extremely cold temperatures and low atmospheric pressure at high altitude.

At altitudes above approximately 2,500 m (8,000 ft), hypothermia becomes a risk and reduced atmospheric pressure and partial pressure of oxygen, which drop below the level required to support brain consciousness at the cruising altitudes of jet aircraft, may impair physiological processes.[5] At altitudes above 6,000 m (20,000 ft), stowaways may also develop decompression sickness and nitrogen gas embolism.[5]