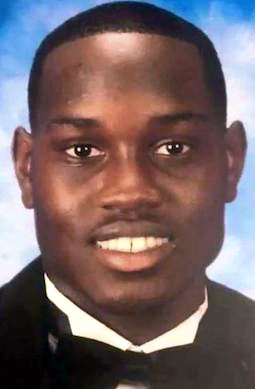 On February 23, 2020, Ahmaud Marquez Arbery, an unarmed 25-year-old Black man, was murdered in Satilla Shores, a neighborhood near Brunswick in Glynn County, Georgia, United States.[3][4][5] Arbery had been pursued by three White residents – Travis McMichael and his father Gregory, who were armed and in one vehicle, and William "Roddie" Bryan, who was in another vehicle and videoed the pursuit and shooting.[3][4] After Travis exited his vehicle and wielded a shotgun, Travis and Arbery engaged in a physical confrontation, during which Travis shot Arbery.[3] Police interview transcripts detailed that Gregory initiated the chase after seeing Arbery running past his house,[6] suspecting that Arbery had committed burglary or theft in Satilla Shores,[7][8] but no evidence has emerged of Arbery doing so.[9][10] According to police testimony, Bryan told police that he saw the chase and joined in independently, but was not sure if Arbery had done anything wrong.[11][12] Arbery had entered an under-construction house with no doors five times in five months, including once shortly before the shooting. Security camera video from inside the house showed no evidence of theft.[13][14]

The Glynn County Police Department (GCPD) said the Brunswick District Attorney's Office advised them on February 23 to make no arrests,[15] while the Brunswick District Attorney's Office denied that its top officeholders gave such advice.[16] Waycross District Attorney George Barnhill twice advised the GCPD to make no arrests, once on February 24, before he was assigned to the case on February 27,[17][18] and a second time on April 2 while announcing his intention to recuse himself from the case due to connections between his son and Gregory McMichael.[18][19][20] Barnhill requested recusal on April 7, and the case was sent to the Atlantic District Attorney's Office on April 13.[18] At the behest of Gregory McMichael,[21] a local attorney provided a copy of the video of the shooting to local radio station WGIG, who posted it to their website on May 5.[22] The video went viral,[23] having also been posted on YouTube and Twitter.[24][25] Within hours, Atlantic District Attorney Tom Durden said a grand jury would decide whether charges would be brought, and accepted an offer from Governor Brian Kemp to have the Georgia Bureau of Investigation (GBI) investigate the case.[24][26]