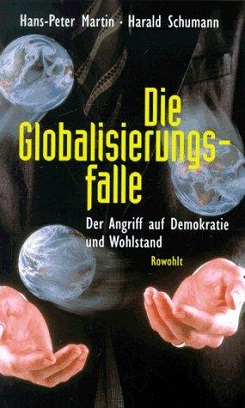 Die Globalisierungsfalle: Der Angriff auf Demokratie und Wohlstand is a 1996 non-fiction book by Hans-Peter Martin (born 1957 in Bregenz, Austria), and Harald Schumann (born 1957 in Kassel, Germany), that describes possible implications of current trends in globalization. It was published in English as The Global Trap: Globalization and the Assault on Democracy and Prosperity in 1997. At this time, both authors were editors of the news magazine Der Spiegel. From 1999 to 2014, Hans-Peter Martin, who is stated in the book to be one of just three journalists to be allowed to take part in all activities at the Fairmont convention, was a member of the European Parliament.

The book was a best-seller in the authors‘ native Austria and Germany[1] and went on to be a worldwide bestseller with over 800,000 copies sold and translated into 27 languages.

In particular, the book is known for defining a possible "20/80 society". In this possible society of the 21st century, 20 percent of the working age population will be enough to keep the world economy going. The other 80 percent live on some form of welfare and are entertained with a concept called "tittytainment",[2] which aims at keeping the 80 percent of frustrated citizens happy with a mixture of deadeningly predictable, lowest common denominator entertainment for the soul and nourishment for the body.