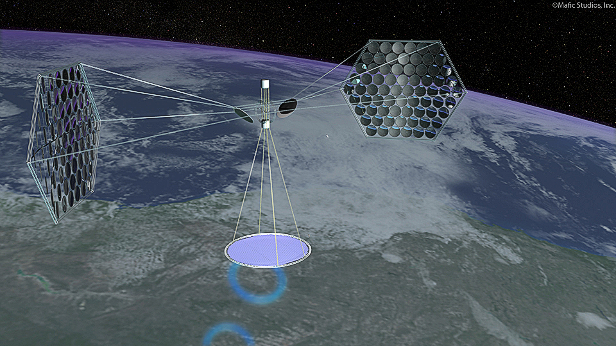 A conceptual image of what a space-based solar power plant would look like. The image was commissioned by the National Space Society Mafic Studios, Inc.

Space… the Final Frontier. These are the voyages of PG&E. Its five-year mission: to explore strange new technologies, to seek out new sources of renewable energy and new revenues, to boldly go where no regulated utility has gone before.

By 2016 the Solaren power station is to be lofted into geosynchronous orbit and begin collecting 200 megawatts of sunlight under a 15-year contract with San Francisco-based PG&E. The solar energy will be converted into radio frequency waves and beamed to a ground station in Fresno to be transformed back into electricity and fed into PG&E’s grid. All very Dr. No.