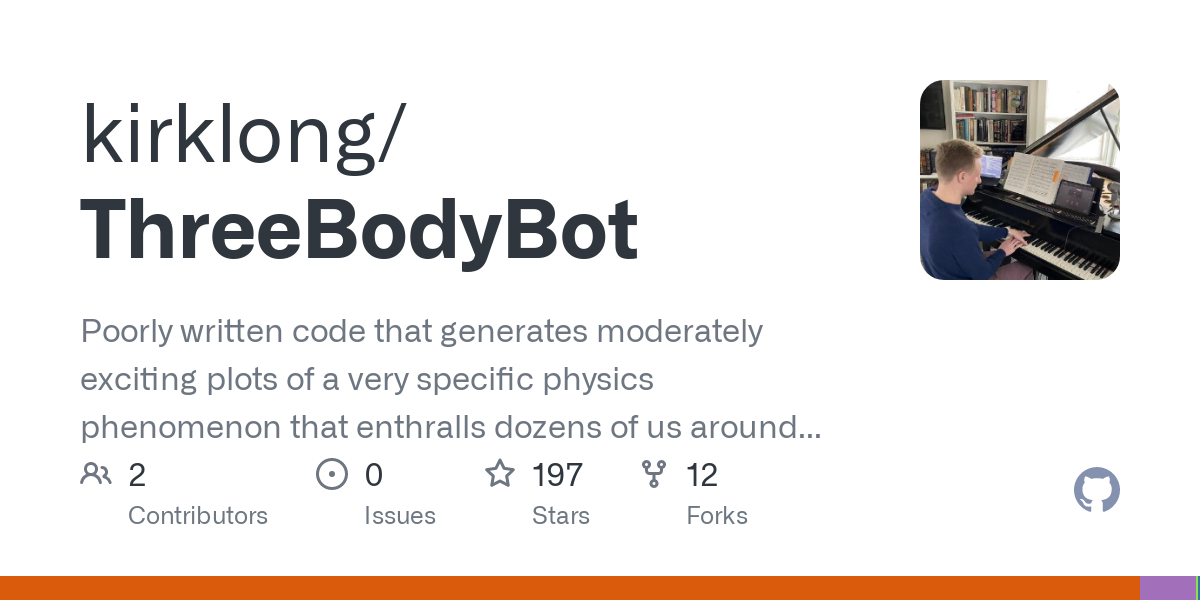 A cool stable solution to the three-body problem created by the code, based off of Chenciner and Montgomery (2000). See all the animations on the bot's Twitter!

This is a fun little pet project I put together in Julia that renders a random gravitational three-body simulation in two dimensions. It's a simple program that uses an explicit implementation of fourth order Runge-Kutta with a fixed step size to simulate the system over a specified timescale. In addition to stopping after a specified amount of time, the simulation will quit if there is a collision between bodies or one or more bodies is ejected from the system. It then makes a pretty animation (complete with randomly generated fake background stars!) and saves it locally. This thing is now pretty much finalized, or at least at v1.0. As of January 2021 the bot has also started tracking its stats, outputting the results of each night's simulation into a text file (3BodyStats.txt) that's read in and analyzed with the notebook 3BodyAnalysis.ipynb, which makes a pretty array of plots showcasing where the bot has been. The longest "solution" the bot has ever found was a system that lasted a little over 500 years, and you can find that immortalized here. The previous record was 207 years, and that solution is immortalized here as longestRunnerUp.mp4.

There are several scripts in the nbody folder worth looking at if you are looking to create even more gravitational chaos. These will start occasionally popping up on the bot's Twitter (currently a 1 in 10 chance each day), and there are new instructions below that should get you started if you want to try to make one of these yourself! The camera implementation with these is still a little buggy though...so if you have great ideas on what should be done to improve it please do so and I will happily credit and merge your changes. I think I can apply the improved camera system from the three-body versions here, but I need to actually sit down and spend a day doing it...