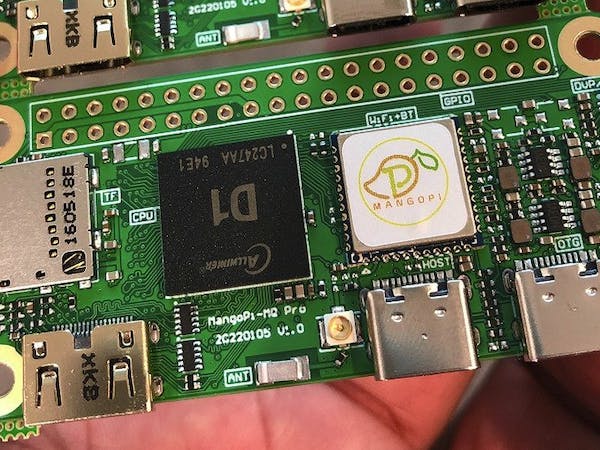 Single-board computer startup MangoPi has unveiled a new design, inspired by the Raspberry Pi Zero range but swapping out its system-on-chip for a RISC-V-based part: the MangoPi-MQ Pro.

MangoPi unveiled the original MangoPi-MQ1 late last year, offering a board designed to take the Allwinner F133-A — a RAM-on-board variant of the Allwinner D1 chip which powers the Nezha RISC-V development board — and provide a functional Linux-capable single-board computer for under $10 in mass production. With the Nezha having launched at $99 — and now costing more — there's little surprise the concept proved of interest.

Now, the company has shown off a new variant, which ditches the bare-bones approach for a more feature-filled board — borrowing heavily from the layout of Raspberry Pi's popular Zero family of single-board computers.

Dubbed the MangoPi-MQ Pro, the board swaps out the Allwinner F133-A for the original D1, requiring a separate RAM module. There's a microSD slot for storage at the left-hand side of the board, two USB Type-C connectors for host and USB On-The-Go (OTG) connectivity, and an unspecified Wi-Fi and Bluetooth radio module. There's also an HDMI video port, plus the familiar 40-pin general-purpose input/output (GPIO) header of its inspiration.