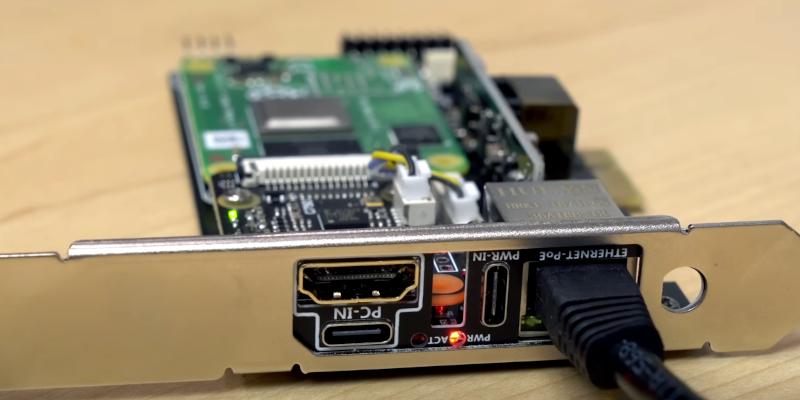 [Jeff] found a Raspberry Pi — well, the compute module version, anyway — in an odd place: on a PCI Express card. Why would you plug a Raspberry Pi into a PC? Well, you aren’t exactly. The card uses the PCI Express connector as a way to mount in the computer and connect to the PC’s ground. The Pi exposes its own network cable and is powered by PoE or a USB C cable. So what does it do? It offers remote keyboard, video, and mouse (KVM) services. The trick is you can then get to the PC remotely even if you need to access, say, the BIOS setup screen or troubleshoot an OS that won’t boot.

This isn’t a new idea. In fact, we’ve seen the underlying Pi-KVM software before, so if you don’t mind figuring out your mounting options for a Raspberry Pi, you probably don’t need this board. Good thing too. Judging by the comments, they are hard to actually buy — perhaps, due to the chip shortage.

While it seems seductive to have a remote solution that doesn’t depend on fiddly software — or even what operating system you are using — [Jeff] notes that latency is relatively high, so you probably won’t be happy with it for any gaming or video. But that’s not really what it is for.