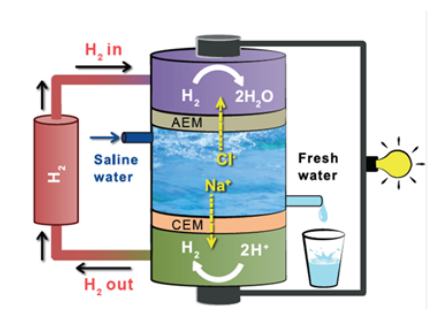 Water is essential to sustain life on earth. Access to safely managed drinking water in a way that it’s available when needed and is free of contamination is not a given to many communities around the world.

About two-thirds of our planet’s surface is covered in ocean waters, but this water cannot be consumed due to its high salt content. If we could remove salt from the seawater, through a process called desalination, we could harness the sea to solve the freshwater crisis. Desalination technologies indeed have been developed and some are in use as we speak—such as the RO (reverse osmosis) water filters used in homes and offices. However, these devices cannot handle seawater, which has a much higher salt content. Researchers have been working to develop better desalination technologies–methods that could match the challenge that seawaters present.

“Existing technologies including reverse osmosis, electrodialysis and capacitive deionization are highly energy demanding or are prone to contaminating desalinated water with chemicals used in the desalination process,” says Dr. Musthafa Ottakam Thotiyl laying out one of the problems he is trying to address along with his research group at IISER Pune.